On the difference between "I need it urgently" and "I can afford to wait", giving me time to choose the best offer at that time

It's urgently needed, so you will pay the product/service at the price you find at that moment (the sooner the better, that's why it's urgent)  - Will be most of the time more expensive than in the second case. There is some extra fee to pay because of the urgency, this is part of the service

Second case; you can afford to wait for the best offer - your choice will be based on more parameters and other extra features, often at a better price than in the first case.

So, to put it briefly: urgency is more expensive but that's part of the deal
Posted by Angie at 3:54 AM No comments:

Email ThisBlogThis!Share to TwitterShare to FacebookShare to Pinterest
Quick piece of wisdom  :-)

If it's free, that could mean several things (at least one of them being true):

* you are the product
* being only a user and not a paying customer, you won't receive the same level of support
(that's free, so you use it at your own risk and you cannot expect a fully customer service experience)
* free could be part also of a freemium offer, meaning if you need more tools/support/advice... , you have to pay
* it's open source - so a certain level of volunteering/pleasure/passion is behind
* free for personal use only (so not at corporate level)
* needing refinement  ;-)
* PR stunt at corporate level - the xxx first customers will have a preferential offer
* PR stunt individually (showing your own capabilities)
Posted by Angie at 3:31 AM No comments:

So, in order to add a bit more functionalities and performance, I see here 2 possibilities

After several searches on Amazon and a lot of users comments, it seems that USB-C is still in its infancy, with some compatibility issues, depending on the equipment brand and how USB-C has been implemented by the laptop manufacturer - around 15-20 % of the buyers for different USB-C solutions are complaining for compatibility issues. So finally opted for a USB3.0 solution.

N.B. Please keep in mind that whatever USB equipment you will use (USB2/3.0/C), do not forget that what you will plug will need power. So choose wisely what you will buy, depending on your needs:
1/ not too power hungry (typically a USB key) - a USB hub without external power is fine
2/ requiring some minimum amount of power (external hard disk or external dvd writer) - a USB hub - powered externally - is highly advised

2/ Internal - changing the wifi card with another model

After checking laptop specs + pictures of the inside, I found an Intel AC3165.
It's an entry level wifi card (Intel branded only) - So going for a replacement: Intel AC8265
Should be worthwile, please see a comparison between both equipments from Intel website:

On the minus side - void laptop warranty

N.B. What to pay attention for:
* preferably use the same brand and the same "family card"
* before changing your wifi card, pay attention to its size (for the same wifi chip, there are half size and full size cards)
* put the installation/drivers files on a USB key or -preferably- already on the C: drive
* be careful when unplugging/replugging the antenna wires 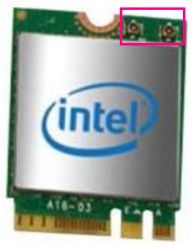 See you next time

--- IT & systems & networking tips, tricks, self assembling my own data center and other IT issues ---

If you are really into IT (professionally speaking or as a hobby), nowadays it's easier to create your own data center, preferably based on 10 Gb technology

Why 10Gb and why your own data center ? Several points to take into account:

*/ Self training is easier and more affordable that before

*/ Hardware solutions offering new possibilities to home based data center (Xeon-D) [AMD Ryzen oriented data center is still in its infancy - as of May 2017 - , to recheck later on whith a real server based solution and a better integration within VMWare Compatibility List)

This is really this latest point which has triggered the beginning of this blog.
Let me explain a bit further:

When speaking about 10GB, there are mainly 2 ways to start if you consider a "small" infrastructure project:
* SFP+ (fiber based)
* 10GBase-T (Ethernet based)

SFP+ offers several advantages when compared to 10Gb Ethernet:
> lower latency
> less power consuming
> second hand SFP+ switches available
> lots of second hand SFP+ NIC cards available from different brands and pretty cheap
but one major disadvantage (at least from a home based data center point of view):
often a microcode at the connector level has been installed, so preventing you to mix different
brands or no name brands (switches and/or NIC cards)

10GBase-T is becoming more and more interesting - nowadays - for your home based data center,
with an existing standard, CAT6E cables and - finally ! - cheaper hardware offers